The Uncommon Abilities Of The Common Osier Willow

As with most plants, the Salix viminalis goes by many different names depending on where you are located. It’s most commonly used name is the osier willow. Sometimes it is referred to as the common osier willow, the common osier, or the basket willow. This willow has been heavily cultivated for many centuries. As such, it has spread through many countries where it did not grow natively.

It is known to be native to central Europe and eastward to western Asia. Some believe it is also native to the southeast in England. It is commonly cultivated throughout all of Europe in regions with low altitude. The Salix viminalis happens to be among the least variable of all Willow plants, yet it can easily form hybrids with many additional species. This is one reason why it is so heavily cultivated. 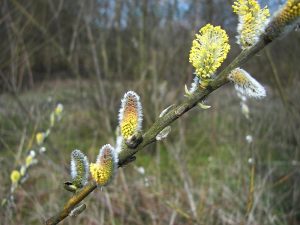 The common osier actually has various uses in modern society. It earned its name, “the basket willow” because its twigs are extremely flexible and can be used to make baskets. The willow’s twigs are referred to as withes. Not only are they useful in basket making, but in roof thatching and various forms of crafts.

Some of the uses of the common osier are slightly more scientific than basket making. For example, it is one of the few plants that can grow in soil with a very high concentration of certain metals. The plant actually absorbs these metals and thus has high levels of the metal in its tissue.

This metal would be toxic to most other plants. Plants that are capable of this absorption, such as the osier willow, are known as hyper-accumulators and are important to the scientific community. The osier willow easily absorbs mercury, chromium, lead, cadmium, uranium, silver, and more. This makes it one of the most versatile hyper-accumulators known to exist.

While the plant may go by the name the “common osier” its ability to absorb these dangerous metals is not common at all. Of course, if you decide to plant one of these in your lawn you probably won’t be doing so for its ability to absorb uranium. Nonetheless, it’s an impressive feat that very few plants are capable of.

Many people grow them for their use in arts and crafts. They may make baskets with their stems or they may make living willow sculptures. Either way, it’s a unique plant with an impressive appearance and abilities.